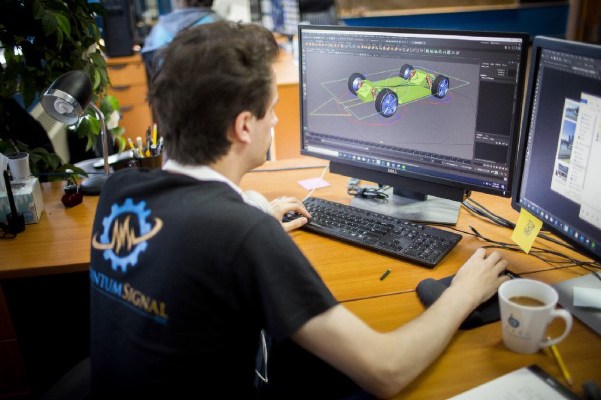 Ford has acquired a small robotics company based in Michigan called Quantum Signal, which has produced mobile robots for a number of clients, including the U.S. military. The company’s specialty has been building remote control software for robotic vehicles, specifically, and it’s also responsible for a very highly regarded simulated testing and development environment for autonomous and remotely controlled robotic systems.

All of the above is useful not only when developing military robots, but also when setting out to build and deploy self-driving cars — hence Ford’s interest in acquiring Quantum Signal.Ford said in a blog postthat while others might’ve been sleeping on Quantum Signal and the work it has done, it has been following the company closely, and will employ its experience in developing real-time simulation and algorithms related to autonomous vehicle control systems to help build out Ford’s self-driving vehicles, transportation-as-a-service platform and hardware and software related to both.

Reading between the lines here, it sounds like Ford’s main interest was in picking up some experienced talent working on autonomy, and very specific challenges that are needed to develop road-worthy self-driving vehicles, including perception systems and virtual testing environments. Ford does, however, explicitly lay out a desire to “preserve” Quantum’s own “unique culture” as it brings the company on-board, pointing out that that’s the course it tookwith similar acquisition SAIPS(an Israeli computer vision and machine learning company) when it brought that team on-board in 2016.

SAIPS has now more than doubled its team to 30 people, and relocated to a new headquarters in Tel Aviv, with a specific focus among its latest hires on bringing in specialists in reinforcement learning. Ford has alsoinvested in Argo AI, taking a majority stake in the startup initially in 2017 and then re-upping with a joint investment withVolkswagen in July of this yearin a deal that makes both major equal shareholders. Ford is happy to both acquire and partner in its pursuit of self-driving tech development, and this probably won’t be the last similar deal we see made en route to actually deploying autonomous vehicles on roads for any major automaker.